Today we got up early (8am) to get over to the California Academy of Sciences in Golden Gate park.

Entry was quite expensive – $150 or so for the family. It was quite interesting, with various exhibits about the natural world, including live penguins and a rainforest world in several levels. There was also a large aquarium in the basement, a planetarium, and 3D film theatre.

There was a large number of visitors, and lots of noise. While I think the place was “good”, I feel it was a bit lacking – maybe the exhibits could have had more detail, more depth, and if the place had been bigger, with more information about each topic, then maybe it wouldn’t have felt so crowded. Lunch was also over priced.

When we finished up, about 4pm, we grabbed a ride back to the motel – had a nice coffee at the corner Italian place, and relaxed before going out for dinner.

For dinner, we walked about 200m around the corner to a Japanese place.

Today we bought some 1-day passes for the cable-cars, and took a few trips around the city. The only point really was to ride…

We took a stop at the top of Lombard, actually not too far from our motel, to see the crazy switch-back…

Hopping off at the end station

When we got hungry we took the cable car up Powell to the corner of Sutter, and ended up at a diner called Lori’s.

And pinball at Lori’s

Today we went to the San Francisco Museum of Modern Art. We left the motel about 11am, in brilliant sunshine.

We got a bit hungry so bought some sweet donuts and chocolate eclairs.

And then a coffee to be sure.

Saw an Apple store, so had to play with all the devices.

And then we saw a sunglass store…

Eventually we made it to the art gallery.

The museum was full of art.

A very interesting set of exhibitions. We managed all 7 floors, and were there for about 5 hours. After we left, we relaxed for a few minutes in the little park area across the road.

We walked home up Powell street, and went past a diner called Lori’s, on the corner of Powell and Sutter – I think mum and dad said they ate here last year.

We also chanced upon a cathedral.

And caught the last of the sun.

Today we got a Lyft down to Pier 33 for our 10:30 trip to Alcatraz. The ferry took about 12 minutes wharf-to-wharf, on a beautiful blue-sky day.

On the island, we were issued with our mp3 players, for a quite good 45 minute  recorded tour of the prison.

All in all, actually a very good little trip out to The Rock. We had a little packed lunch with us, so we had a little bite while we waited for the ferry back to town.

We then took a little walk up to Fishermans’ Wharf, and had a wee rest before Lyfting back to our motel. 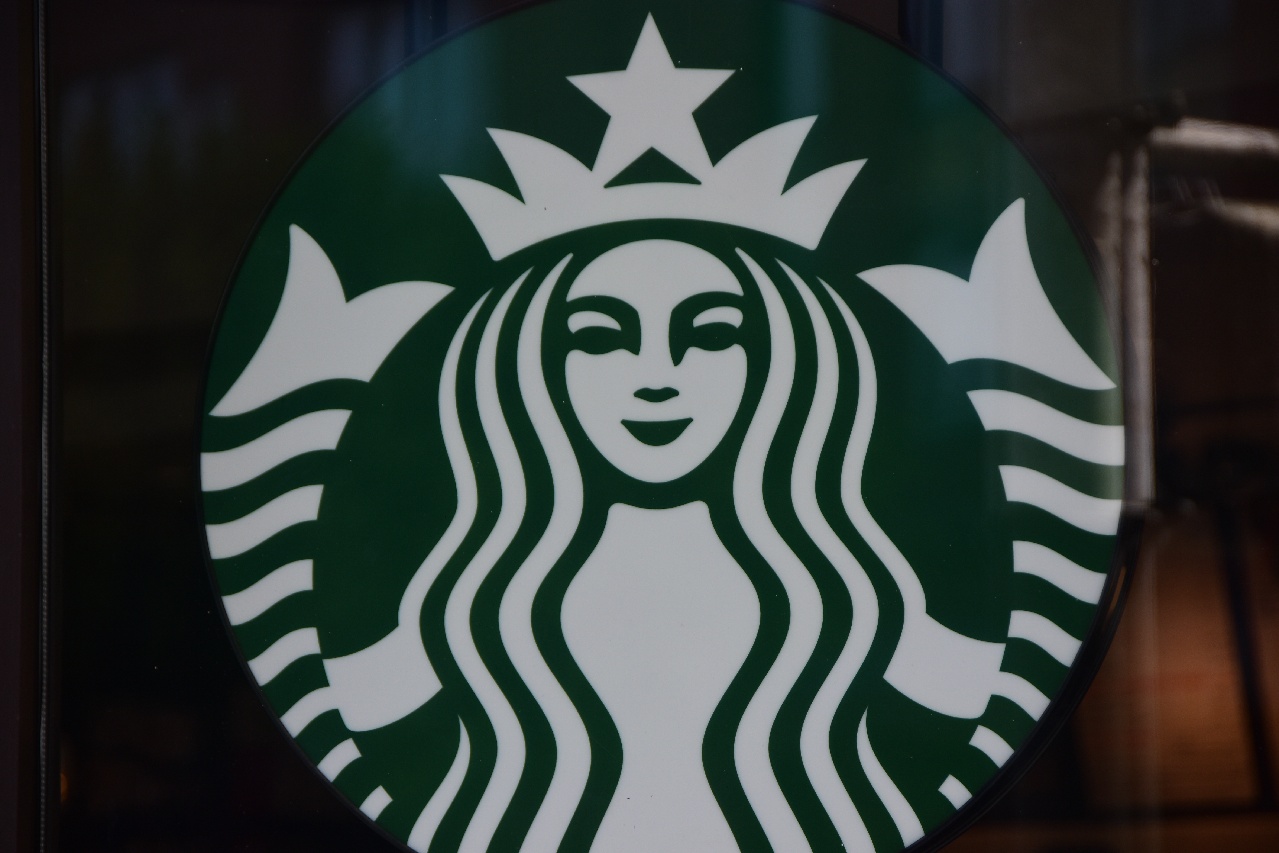 Today we decided to walk down to Westfield shopping mall to see if we could get a bargain. We had originally been considering a day trip to a huge outlet shopping centre outside San Francisco, but it turned out to be about 60km away, and we weren’t too keen on that.

So a walk to Westfield…

We walked down towards Union Square, and even crossed Sutter Street on the way.

A brief pause in the lovely sunshine .

Across the road from the shopping mall was a turning place for one of the city tram lines. Quite interesting to watch.

Today was a bit of a walking tour, leaving our motel about 11:30 and heading over to the Haight-Ashbury area.

We passed lots of olden houses…

On the way we stopped off in Japantown where we ate lunch – sushi, and a chicken roll.

We also went past the “painted ladies”, which somewhat disappointingly turned out to be houses.

We had a brief stop in a large game-store

And rounded off the afternoon with a coffee and hot chocolate

We caught a taxi back to the motel (actually a “lyft” service), and ate dinner at a local butcher where they also make burgers.

And here is an external picture of our motel for the curious (the non-curious should close their eyes now).

Today we walked from our motel down (up and down) to the Exploratorium. 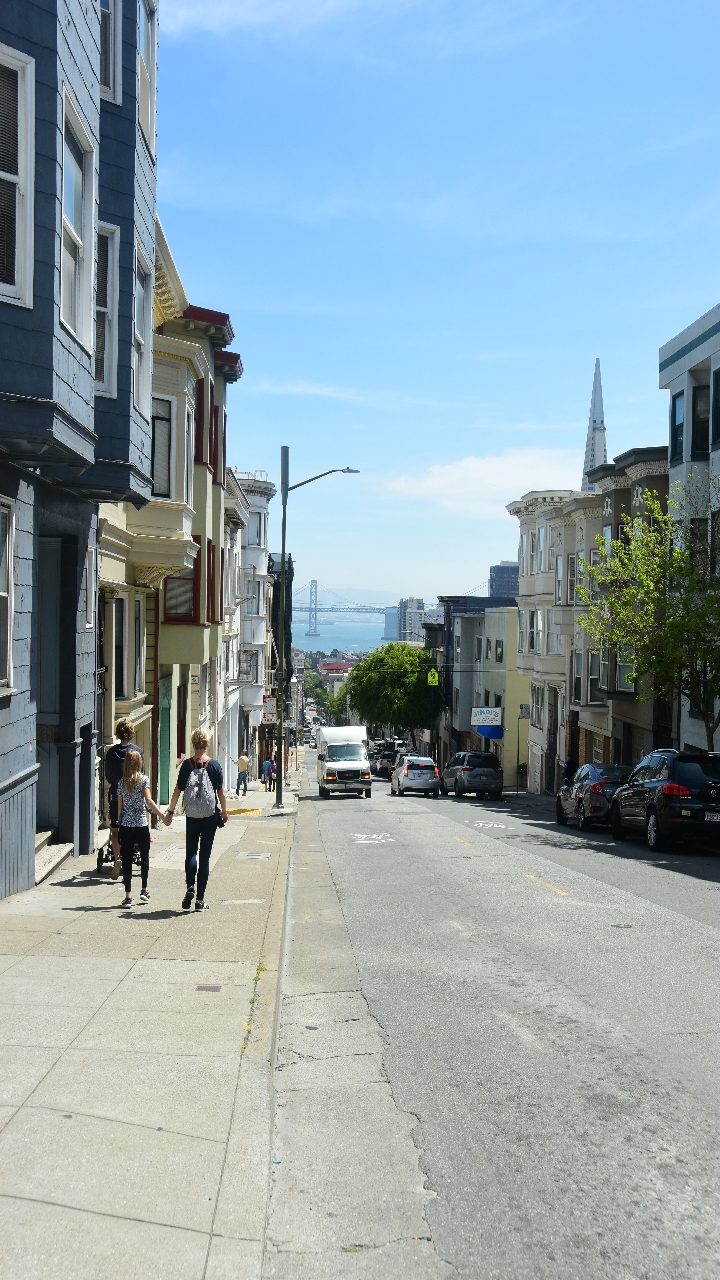 It was a long walk – probably 3km – but the sun was out and it was warm.

The Exploratorium was a great place to spend the day, not least of which because a random lady gave us 3 free tickets as we were walking in… that saved us about $60.

Inside, there were heaps of interactive exhibits, including motion/mechanics, light, electricity, magnetism, biology, sociology, and geography. 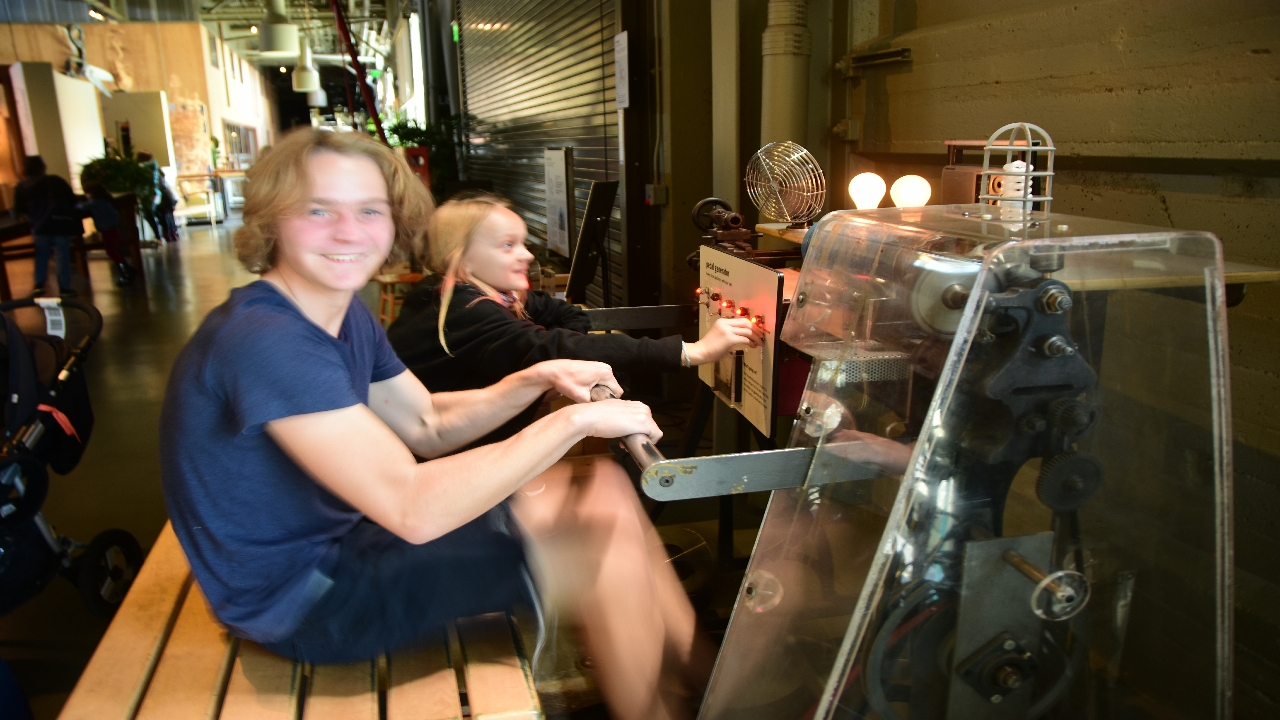 We took the Big Bus tour around San Francisco today. Hopped on about a kilometre or so from our motel, and travelled a few stops to Pier 39 where we paused for lunch.

After lunch we continued the circuit, including a breezy and cold trip across the Golden Gate bridge.

It was a good way to get an introduction to the city.

Back at the motel for dinner, where some of us are having sushi, and others tacos.

The sad day finally came where we had to say farewell to family and friends. We drove up to Auckland airport from Papamoa on 02 May, arriving about 4pm. We checked in, and waited for our 19:45 flight on Air NZ to San Francisco.

Air NZ food was honestly some of the worst airline food I have had. Dry bread buns, and tasteless vegetables and beef stew. Not to mention that when you ask for a “Steinlager”, they hand you a Steinlager Pure!

On the other hand, their entertainment system was excellent.

It took us about 2 hours to make it from the plane through the horrendous queues at passport control, and collect our bags, which were circulating on the bag conveyor.

Our time in NZ was fantastic, and simply wouldn’t have been possible without the massive help and support from our family. Thanks so much for everything guys!

The sixth of December, we travelled further along the cost to a place called Weligama. The town itself is rather uninspiring, although we did find a nice local restaurant for lunch one day.

The “resort” we stayed at for 3 nights was called “Neptune Story” – or maybe “Neptune Resort”, or “Good Story”. It was not quite 100 percent certain what the name was.

In any case, the beach was excellent, the resort itself less so. The first night we had 2 rooms which stunk of bad sewer. The manager did try to rectify the situation, and upgraded us to a couple of “bungalows” – one of which stunk of old cigarette smoke.

Even so, with the nice pool for the kids, it was quite pleasant here. There were lovely sunsets, and a little bar on the beach. 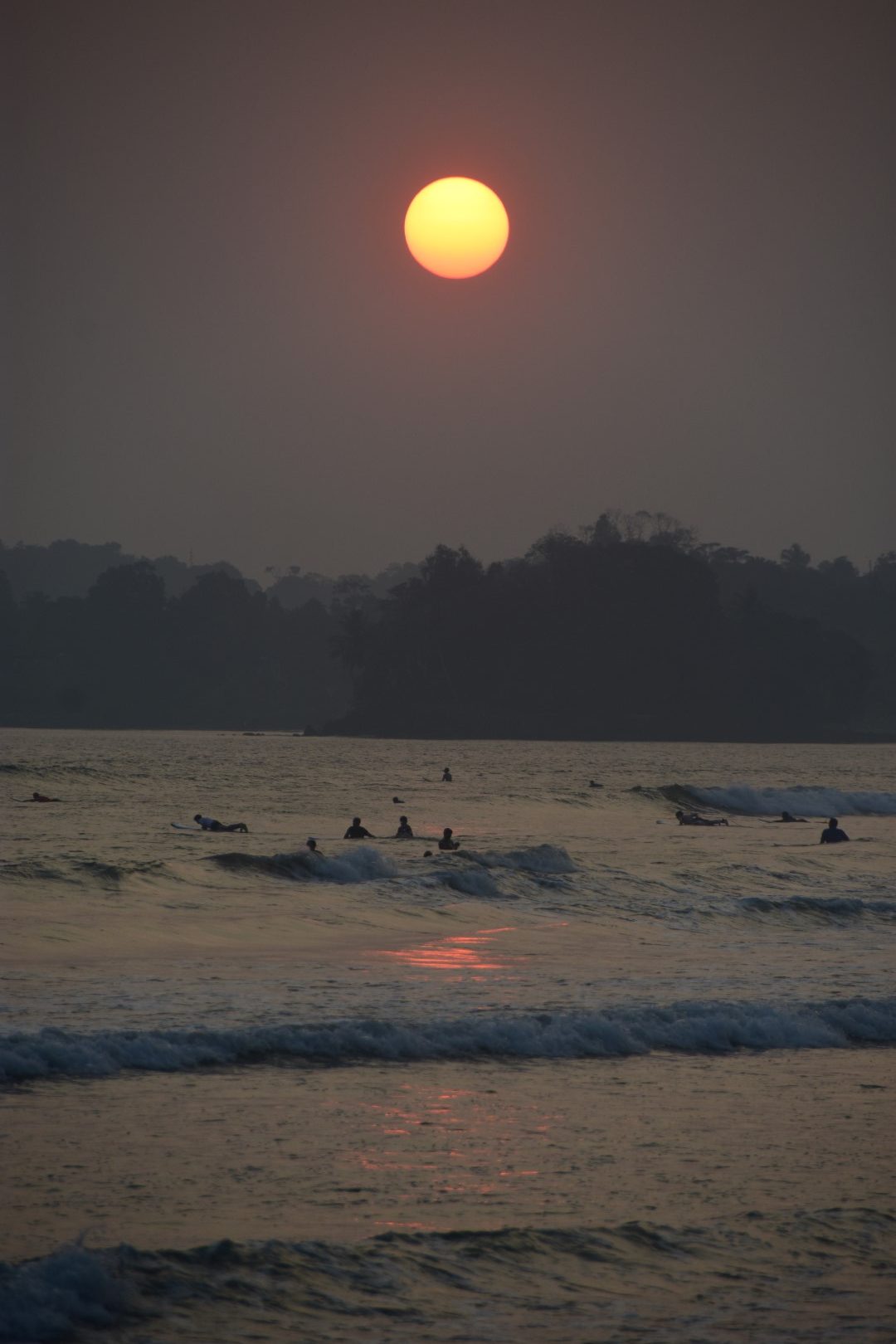 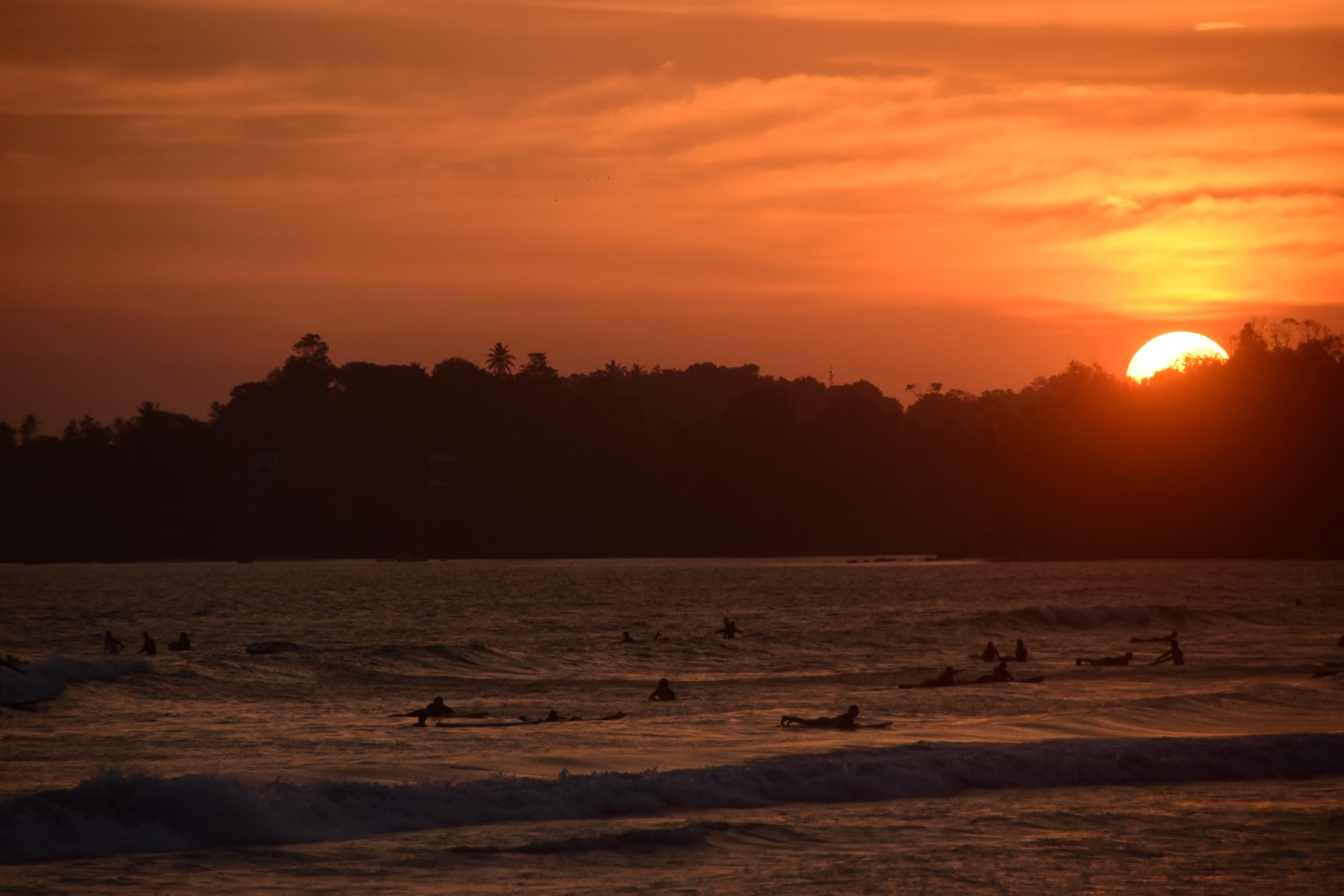 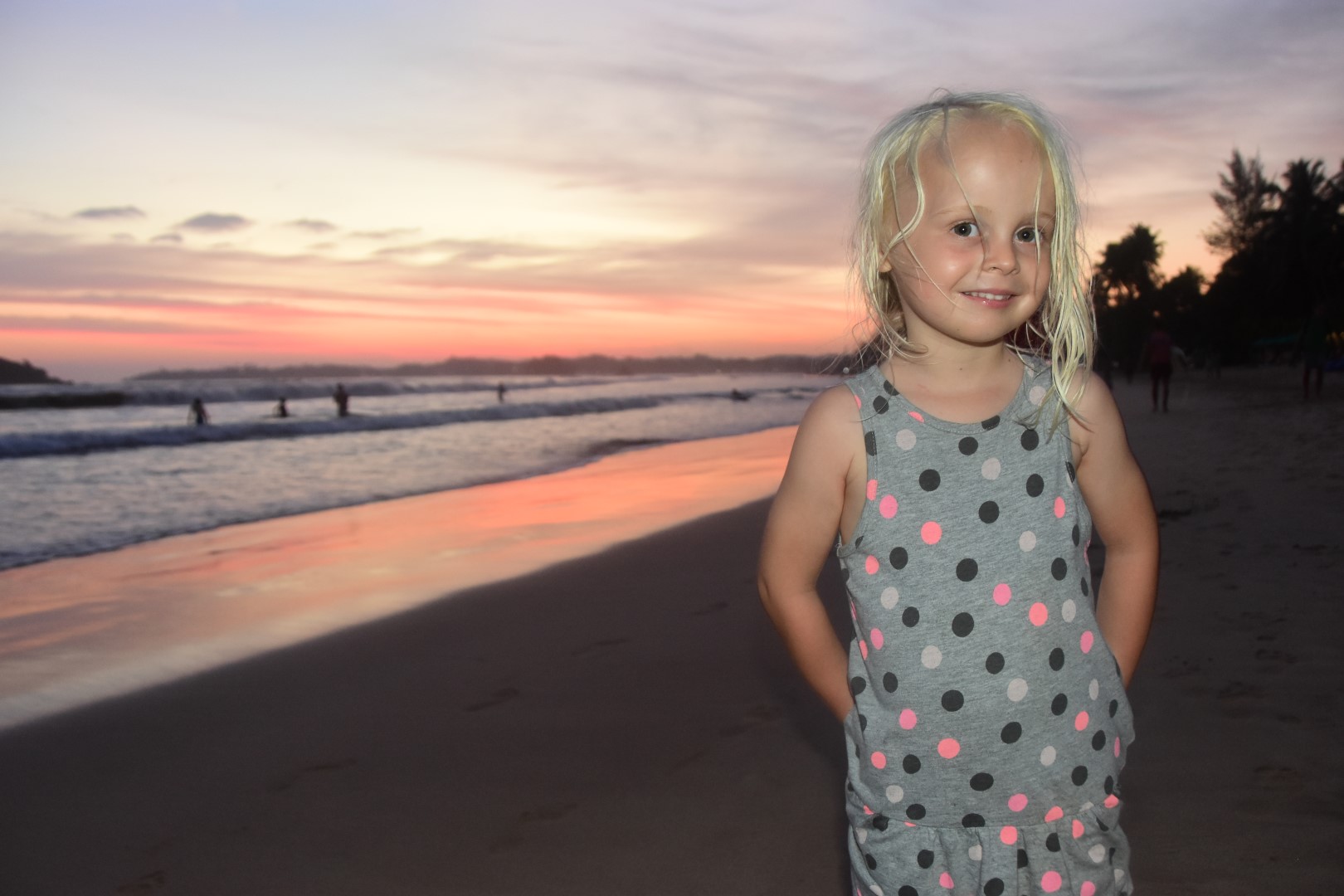 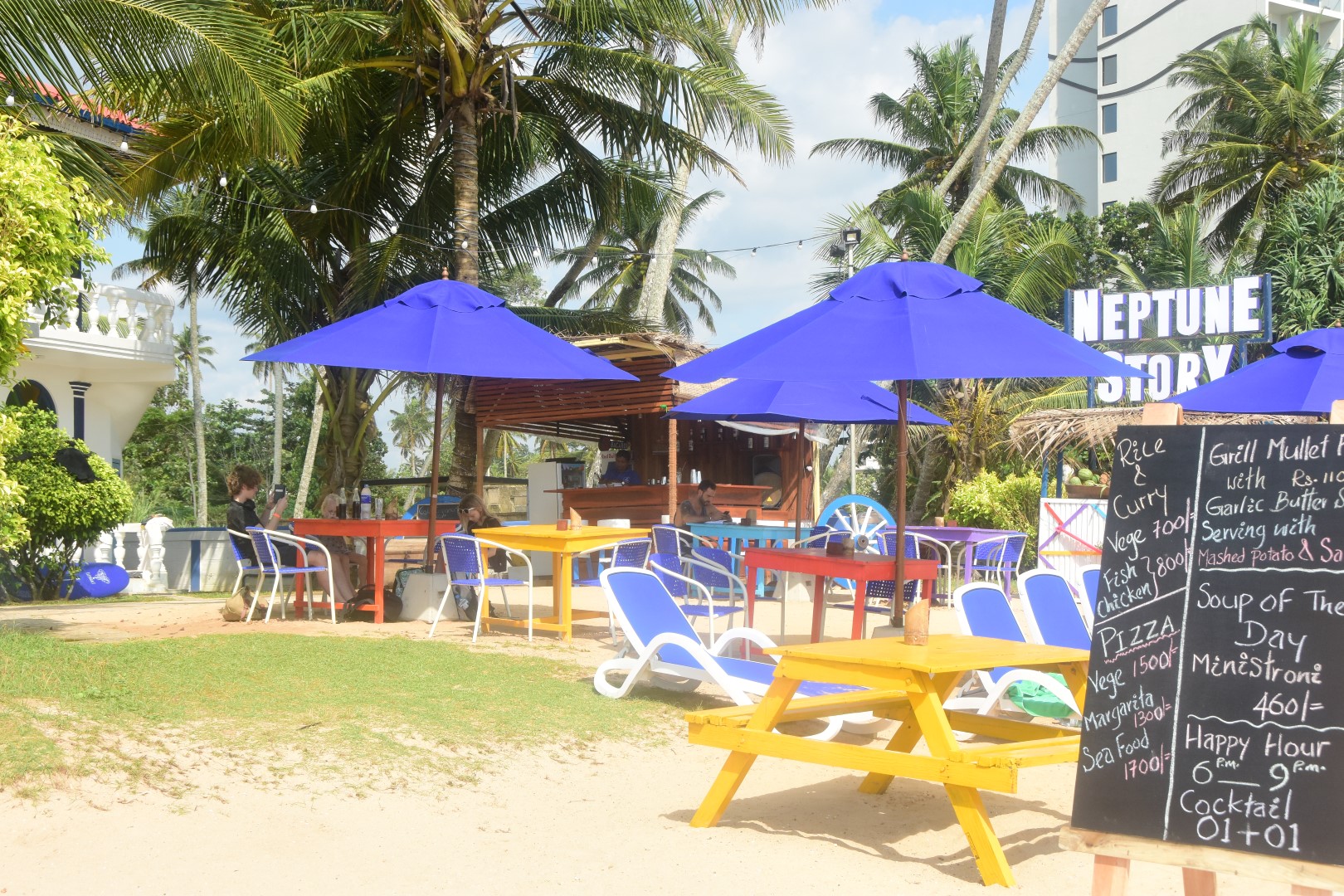 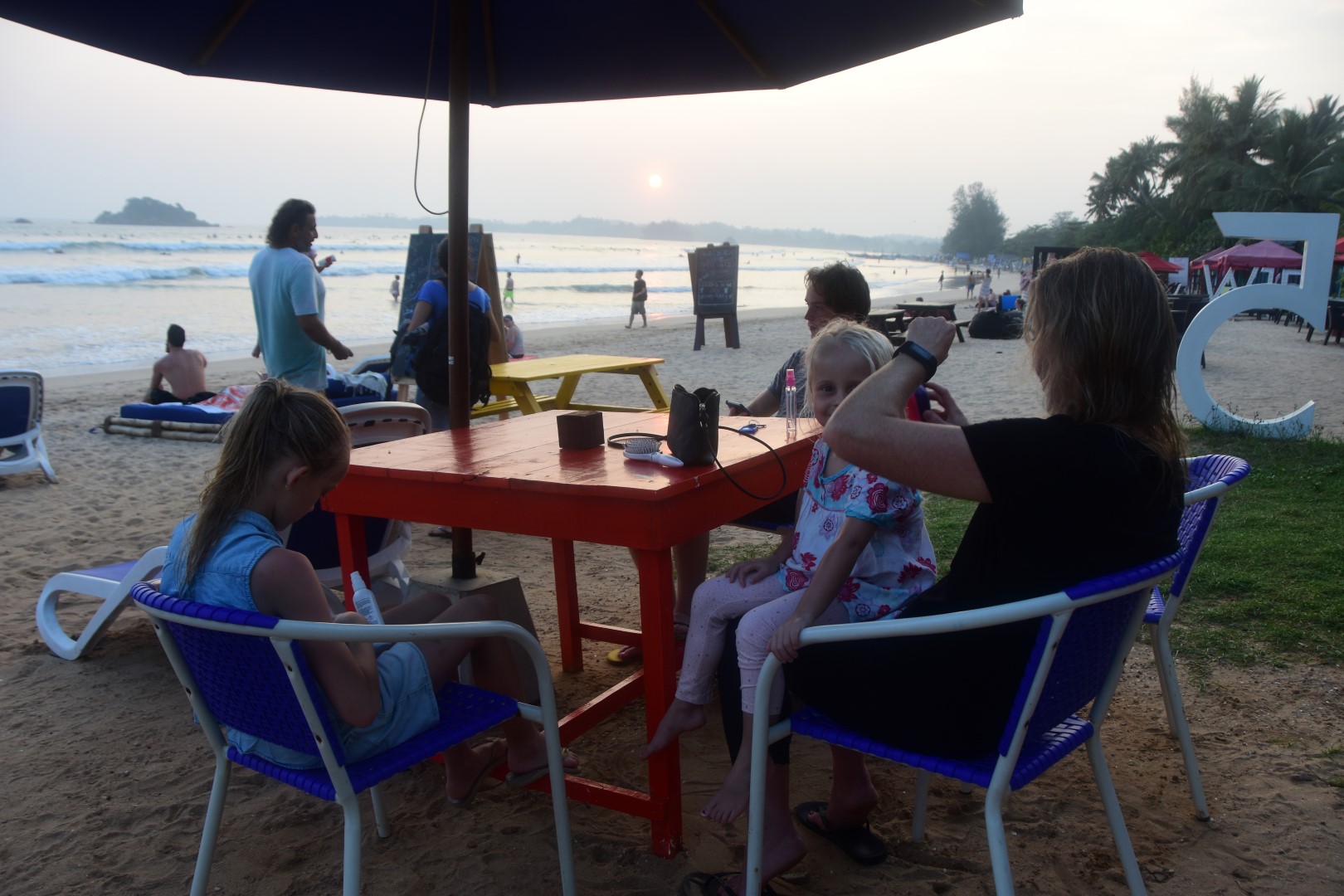 The beach had really good surf, and Albert was out several times surfing, Elise was out boogie boarding, Malene was out a couple of times surfing, and Peter even tried it. 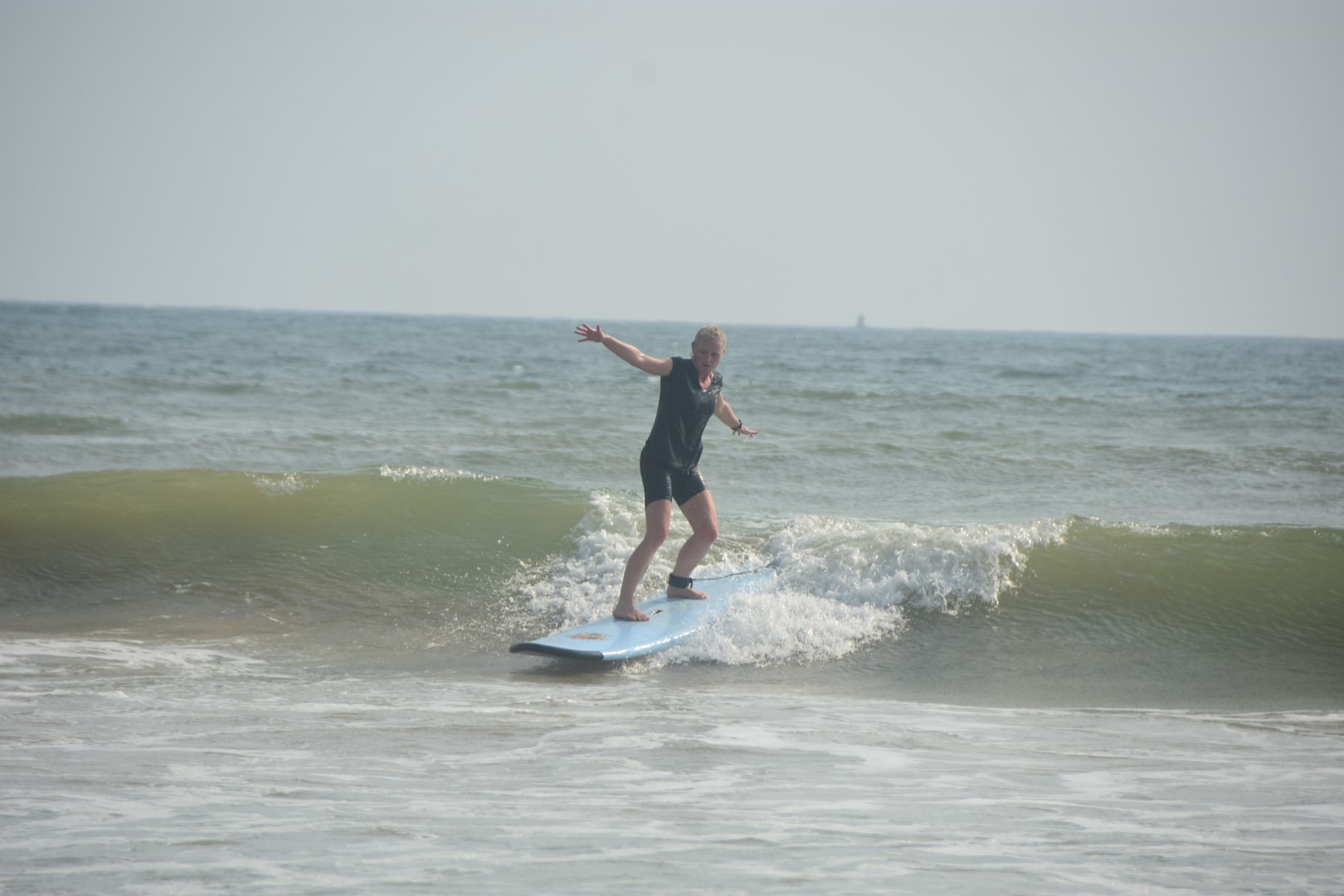 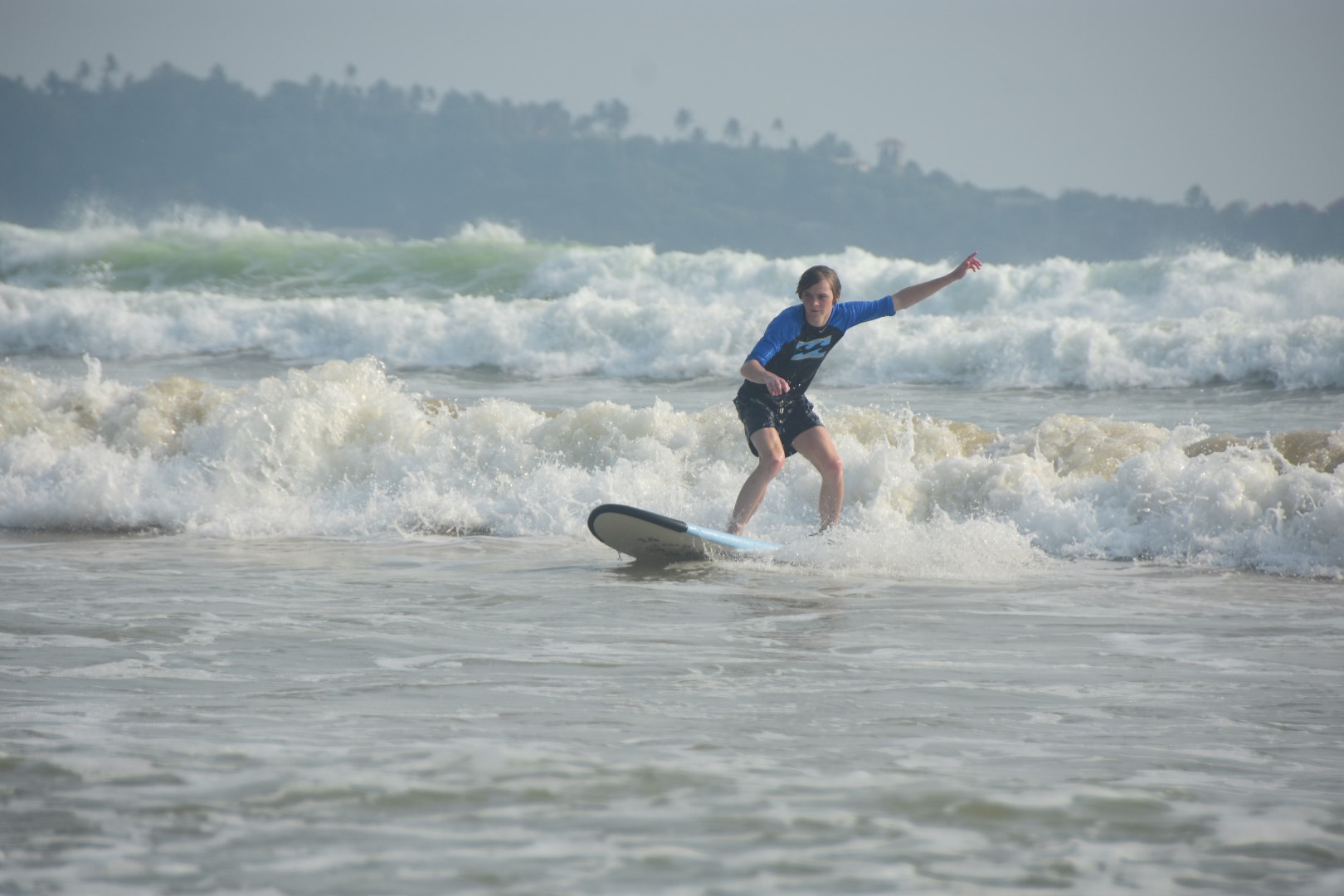 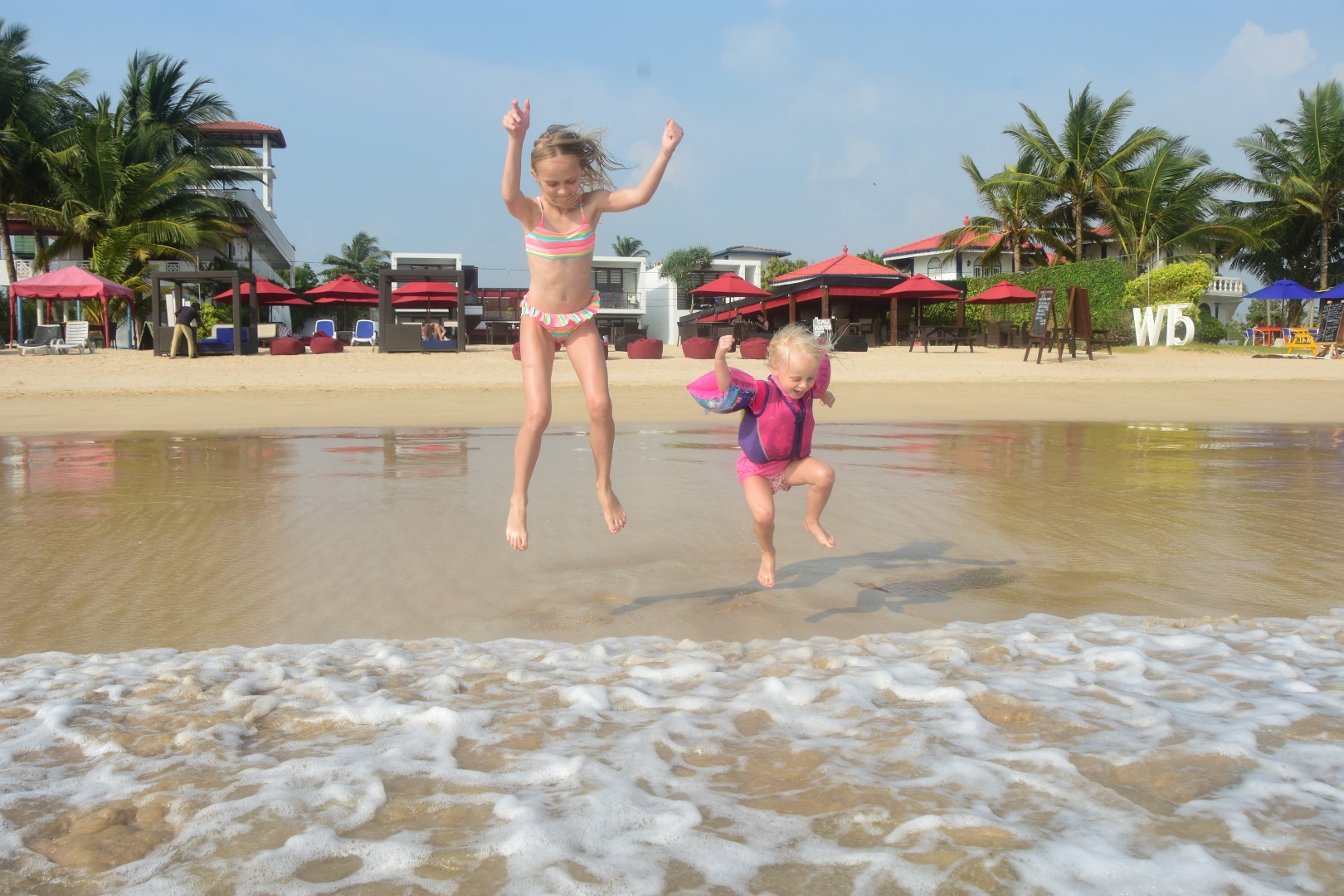